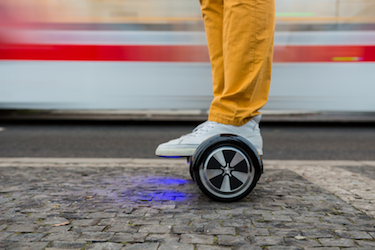 Hoverboards are a product that topped most of the best-selling holiday gift lists this past season, but over the past few months there have been an alarming number fires caused by the batteries in this product (regardless of manufacturer).To date there have been at least 40 reports of hoverboard fires in 19 states according to CNET. As a result of the growing concerns regarding hoverboard fires, most airlines have banned them on passenger flights and the US Postal Service has stopped including them on air shipments as well. Even some of the top online retailers have suspended the sale of these hoverboards.

In an effort to prevent catastrophic shipment losses our underwriters have advised that the lithium ion batteries used to power hoverboards are known to be hazardous, and should not be included in a household goods shipment. Any damage to other shipped items resulting from the ignition and combustion of the batteries will not be covered.

Such items packed with loose household goods presents a significant inherent risk as the normal shifting of items while in transit could cause the hoverboards to ignite.

We urge you to restrict the shipping of hoverboards to your internal shipping policy.